How can we help?

Our detailed knowledge of the entire development process enables us to provide a bespoke and comprehensive Development Consultancy service.

We can also provide advice on pre-funding, development agreements, and exit strategy.

We have experience of a wide variety of projects including department store break-ups, out-of-town retail parks, supermarkets, mixed-use and traditional high street development. 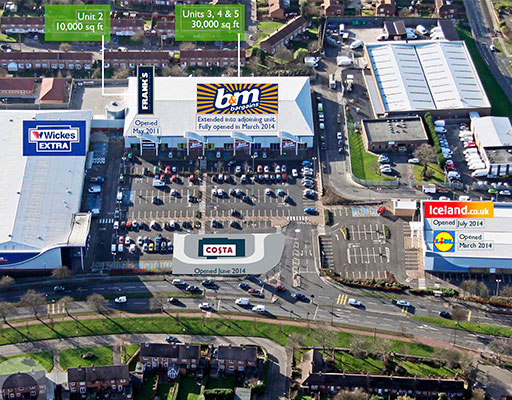 The major part of this site, formerly occupied by the North Eastern Electricity Board as a regional depot, was first identified as being potentially suitable for retail development by RPC in conjunction with Chelsfield plc. We acted for Chelsfield in buying this interest, and adjoining properties, including a petrol filling station and a first-generation B & Q store.

We were closely involved in the design layout for a proposed retail park, and provided strategic research on tenant demand during the planning application and subsequent Appeal. Planning consent was eventually secured for a development of circa 100,000 sq ft, (later increased to 150,000 sq ft), with a 10,000 sq ft garden centre, and surface car parking for 344 vehicles.

The entire site was then sold by Chelsfield to Brookfield Multiplex, and RPC were retained as sole leasing agent with a brief to obtain a major pre-letting, prior to a construction start. In a declining occupational market, we secured a letting of the 50,000 sq ft anchor store and garden centre to Wickes (Travis Perkins), thus enabling the scheme to be successfully constructed. The completed value of the development was circa £25m.

RPC were retained to act for Oakmill Properties (a joint venture company headed by Gleeson Construction) in the off-market purchase of a former garage showroom in Barnes, SW London. The garage occupied a prominent site in an affluent area close to the River Thames, and offered potential for a high quality mixed-use development.

We assisted Oakmill in considering alternative scheme layouts and associated development appraisals, and we undertook early research into prospective tenant demand. Planning consent was subsequently obtained for a scheme which provided retail space at ground floor level, with 9 flats above.

RPC were also appointed as letting agent for the retail element of the scheme, and secured strong interest from three major supermarket operators. The store was eventually pre-let to Sainsbury’s on a 15 year FRI lease, subject to 5 yearly upward only reviews with RPI uplifts, at a rental in excess of £30psf. The development was then pre-sold to an overseas investor for around £6m.